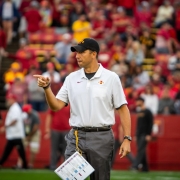 Sports coverage is an experience that’s pretty hard to explain. It seems simple when you think of it as just sitting in a press box watching sports and then writing about it, but there’s so much more that goes into it. Especially at big events like a bowl game.

When I covered the Alamo Bowl last December with my two fellow sports editors at the time, Trevor Holbrook and Aaron Marner, there were so many things to figure out before we even got to San Antonio. We had to figure out who was going to drive, when we were leaving, where we were staying and who was coming with us to take photos. We got to the hotel right before the first of many press conferences with Iowa State assistant coaches and players.

The week was a whirlwind, but it showed me how important the job we do is. It sounds silly, obviously — covering a bowl game isn’t going to be as impactful as say, covering a political campaign — but there were moments there that prepared us for a career in any type of journalism. From thinking on the fly to get stories done to finding creative ways to produce content during the trip, we were doing what we loved. The game was probably the best part. We got to cover a close game in a historic stadium, got to speak to players and Campbell afterwards and wrote all of our stories in the stadium before catching a 1 a.m. ride back to the hotel.

When I think about why journalism is worth it, I think a lot about that experience. When we as students are given opportunities, we can learn in the best ways and set ourselves up for success. I wouldn’t change a thing about what I do.

Want to join the discussion?
Feel free to contribute!

October in the Newsroom
Scroll to top