October is upon us. This means the weather is getting colder, the leaves start to change color and carved pumpkins start appearing on doorsteps.

This year, October also means that I have finished my first full month of serving as the Editor-in-Chief of the Iowa State Daily. Although it’s only been a month, it’s been a wonderful, crazy rollercoaster and there is a lot to reflect on.

I have learned many lessons throughout my time as EIC so far, and one of these lessons is that I will never stop learning, and that’s a good thing. I am not always going to have all the answers. While that is scary on the surface, it lets me connect with others and work through problems. Even if I don’t know the answer, I will work to find one.

Another important lesson I have learned is the importance of the things that may seem small to me end up making a big difference. In the past week I have been stopping in to section reporter meetings, talking to individual reporters about stories that I have read of theirs, and helping put more faces to bylines. My goal is to be a very present and involved Editor-in-Chief, not some name that reporters hear about but never see who I am or what I do. I want to remember this more going into the rest of the semester, and take time to connect with people who may not be in the newsroom everyday, but do extraordinary work.

Every single day I learn something new from my staff, whether that be a fact from a story they are working on, how my leadership techniques are working or how I can help best help them grow as editors and leaders.

As an Editor-in-Chief, I am only as good as my staff is. It’s an honor to not only be serving my community, but to be able to serve my staff as well.

Sports coverage is an experience that’s pretty hard to explain. It seems simple when you think of it as just sitting in a press box watching sports and then writing about it, but there’s so much more that goes into it. Especially at big events like a bowl game.

When I covered the Alamo Bowl last December with my two fellow sports editors at the time, Trevor Holbrook and Aaron Marner, there were so many things to figure out before we even got to San Antonio. We had to figure out who was going to drive, when we were leaving, where we were staying and who was coming with us to take photos. We got to the hotel right before the first of many press conferences with Iowa State assistant coaches and players.

The week was a whirlwind, but it showed me how important the job we do is. It sounds silly, obviously — covering a bowl game isn’t going to be as impactful as say, covering a political campaign — but there were moments there that prepared us for a career in any type of journalism. From thinking on the fly to get stories done to finding creative ways to produce content during the trip, we were doing what we loved. The game was probably the best part. We got to cover a close game in a historic stadium, got to speak to players and Campbell afterwards and wrote all of our stories in the stadium before catching a 1 a.m. ride back to the hotel.

When I think about why journalism is worth it, I think a lot about that experience. When we as students are given opportunities, we can learn in the best ways and set ourselves up for success. I wouldn’t change a thing about what I do. 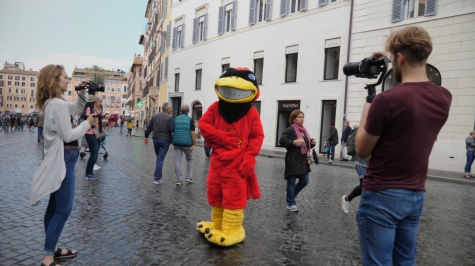 Filming near the Spanish Steps

The pieces were in place, the equipment was charged, and our star; a big red bird.

We had been contracted by Iowa State University’s College of Design, to create a short film featuring Cy the Mascot.

Our goal; capture the Study Abroad experience in 2 weeks.

This had been an experience of a lifetime. If I were to tell my 16-year-old self, a kid editing lightning bolts shooting out of his hands, that he would be filming and directing in one of the most beautiful backdrops in the world, young Brian would probably faint.

Not only because time travel had apparently been invented, but because filming in Italy was something out of a dream.

There were whisperers of this opportunity a year before, but nothing came of it in 2017. I had completely forgotten about it, until I received a call in 2018 from Tony, my Creative Director. We had gotten the green light.

We started planning months before. We were introduced to the director of the Rome studio, Pia. Multiple meetings with our College of Design contacts took place. Our project manager, Maggie, had worked feverishly on our schedule. The stage was set.

The scope of the story seemed to change as the days went by. What started as a 2 to 3-minute sizzle reel, turned into a 3-part act, with a prelude and end credits. There were reshoots, where we had to realistically green screen Cy into an Italian apartment. Police had stopped us on the Spanish Steps, and a Mediterranean storm rolled in as we filmed at the Borghese Gardens. 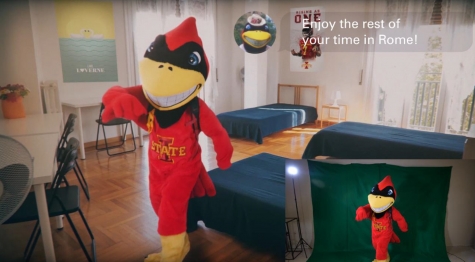 Reshooting Cy on a green screen

“In my career, the hardest thing I’ve had to learn is delegation.”

Words to live by. I tend to work alone, but this project pushed me to use all the resources at my disposal. This meant our team. We could not have captured all we did, with the challenges we ran into, without all-hands-on-deck.  One of our designers, Brenna, handled the entirety of the animated credits and title screen. Gage, another designer with a love for movies, showed his ability to compose and direct a scene. All team members were vital to shaping the final story.

The 1st edits were not strong. The footage was nice, but the story was missing something. We needed to convey the feelings a college student would experience while studying in a world away. How would one handle the joys, stresses, failures, and triumphs that came with this?

With countless team meetings and revisions, we began to recut our story.

The right music made all the difference. Using a popular Ben Rector song, paired with an epic orchestral instrumental, we began to get a sense of what this short film could be.

We pushed our sound effects, on-screen graphics, and color corrections. We found opportunities for humor and bloopers.

In the end, we had created one of Model-Farms biggest achievements, collaboration. It was a lesson in changing course, finding your vision, and working as a team. I learned more about how to film, direct, and delegate work to our interns. This opportunity has forever changed how I work as a Video Production Manager, for the better.

The story you end up telling will usually be different than you imagined. This isn’t always a bad thing. Work with what you’ve been given, learn from mistakes, and push forward into greater things. We created a product to be proud of, with many more to come. 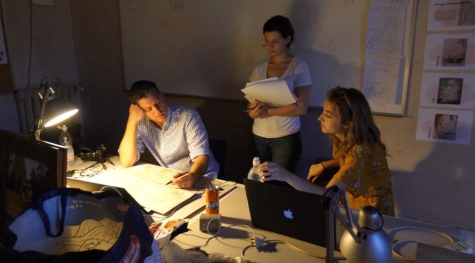 As a student-run organization, summer can feel like the time to take a break. School’s out, the weather is beautiful, and everyone is on vacation, right? At Model Farm, the summer is the perfect time for us to hit our stride. All our staff is in the office working full time each week, which is easily double the hours everyone can put in come the beginning of the semester. This is important because most of our design staff is new at the start of the summer, so the full work weeks allow us the teach them the skills they need to be successful at Model Farm.

Transitioning from the spring semester to the summer is made easier when there are a few people bridging that gap. I was one of two project managers at Model Farm since October 2018 and became the solo project manager as we transitioned to the summer. This was helpful in getting any projects we were in the middle of transitioned to new designers, because I had my hands in many of the projects already. However, it presented some challenges for me personally, as well as for the team, when it came to the projects that needed to continue after the school year which I wasn’t managing prior to summer. The key to making it as smooth as possible was clear communication with our client and working in tandem with the old project manager prior to the summer to make sure every moving part was in the right place.

Since the beginning of the summer, I have seen myself grow in my role more rapidly than I did in any similar span of time during the school year. Getting the opportunity to work as a project manager for 40 hours a week has allowed me to improve at client communication, feel more comfortable in pressure situations as we approach deadlines and be stronger at managing all the moving parts day-to-day. It has made me far more comfortable in the role than I was at the beginning of May and its due to the fact that I am able to fully commit to my role as project manager during the summer.

The Department of Public Safety first came to us in 2018 and asked us to take the 2017 report and make it into something more digestible and readable – to make a version that could be used to introduce DPS to new students, allow the department to reflect on its previous year, and as an actual report to entities like the Iowa Board of Regents.

In our first year the project was headed by then editor-in-chief, Emily Barske, who had developed our strong relationship with the Department of Public Safety.

Upon the release and distribution of that first publication, the department received positive feedback from campus and community members. Michael Newton, Chief of Police for Iowa State University Police Department, was excited about the new partnership.

The ISU Department of Public Safety is unique from a lot of other police departments, as you might expect being based on a college campus. The department puts a great deal of emphasis on outreach and engagement and they are extremely focused on connecting with the ISU community in new ways and dispelling the stigma college students normally have towards police.

Over the past few years, the department ramped up its outreach efforts dramatically, introducing events like ‘Donut Disrespect’ where officers hand out donuts in various places around campus and Ames. The department is also very focused on developing a positive relationship with the community and creating opportunities for people to meet officers in casual situations.

Thus began a win-win relationship that continues today – our students get a chance to work on a professional publication, and learn to work with a client and their needs; while DPS gets a product that is for students, by students, which is vital to them and their mission.